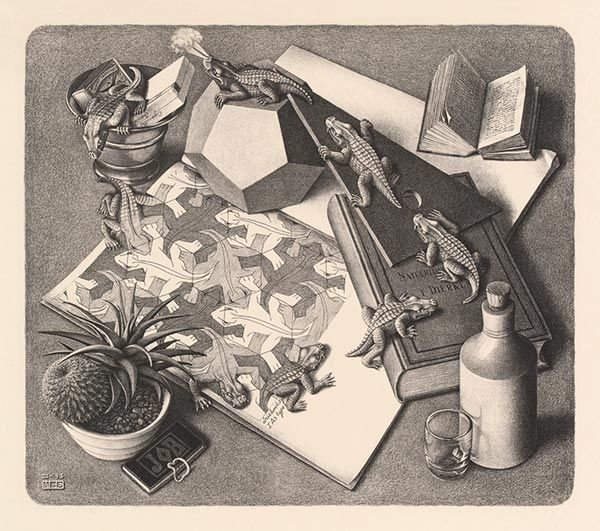 Reptiles is a lithograph print by the Dutch artist M. C. Escher first printed in March 1943.

Reptiles is a lithograph print by the Dutch artist M. C. Escher first printed in March 1943.

It depicts a desk upon which is a 2D drawing of a tessellated pattern of reptiles and hexagons. The reptiles at one edge of the drawing emerge into three dimensional reality, come to life and appear to crawl over a series of symbolic objects (a book on nature, a geometers triangle, a three dimensional/pentagonal dodecahedron, a pewter bowl containing a box of matches and a box of cigarettes) to eventually re-enter the drawing at its opposite edge. Other objects on the desk that may also be symbolic are a potted cactus and yucca, a ceramic flask with a cork stopper next to a small glass of liquid, a book of JOB cigarette rolling papers, and an open handwritten note book of many pages. Although only the size of small lizards, the reptiles have protruding crocodile-like fangs, and the one atop the dodecahedron has a dragon-like puff of smoke billowing from its nostrils.

Like many of Escher's works, the meaning of the imagery is enigmatic. There are, however, a number of scholarly interpretations of the work. One is that the lizard represents man, emerging from pure concept in two dimensions, becoming a three dimensional being, groping through life acquiring knowledge and wisdom, arriving at deep understanding of science and sacred geometric principals and the alchemical/spiritual nature of reality and existence, and finally descending to reunion with the realm of pure concept. In this theory the objects around the edge of the drawing are signals of the stages of emergence (cactus, biological life), the beginning of the fire-quest for knowledge (rolling papers), contemplation and distillation (a jug and partially consumed glass of spirits), deep study, understanding and wisdom (the open well-used notebook), and re-integration (matches and cigarettes symbolizing controlled/civilized fire that nonetheless consumes and returns the physical to the abstract).

Once a woman telephoned Escher and told him that she thought the image was a "striking illustration of reincarnation".